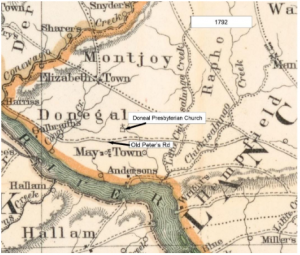 The old Indian trail, Old Peter’s Trail, originating in Downingtown, Pa. went through Mount Joy, passed Donegal Spring to Ridgeville (now Stackstown near Nissley Vineyard) on to Conoy town and then to Paxtang (now Harrisburg). This trail was the route for Indians, Indian traders, and trains of pack horses carrying the freight of Indian trade. This trail was the main artery from Philadelphia west to Logan’s Ferry (Bainbridge) in the early 1700’s.

The area around Donegal Spring was settled as the part of the great Scottish Irish exodus to seek freedom from religious persecution in 1714. Carved out of William Penn’s land grant and steeped in the history of the early pioneer days of the Americas, the Cameron Estate Inn sits in this area called Donegal, eventually divided into East and West Donegal Township. 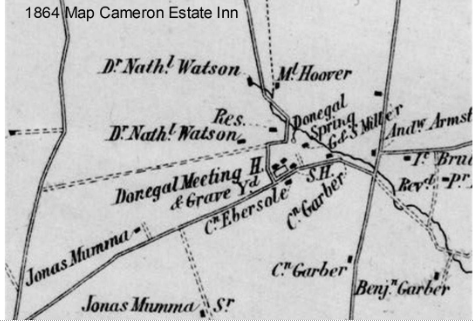 One of James Stevenson’s descendants, Major William McKinley, became the 25th President of the United States.

The property remained in the Stevenson family until the Watson family was deeded the property in 1780’s when John Watson married Ann, the oldest daughter of James Stevenson. It was Dr. John Watson (John Watson’s Son) who built the front part of the Inn in 1805 which was the largest brick home on the western frontier upon its completion. Very active in church, the Watson family occupied pew 2 in the sanctuary and assisted in the 1774 remodel of the church. The Watson family resided on the property for 100 years when Dr. Nathaniel Watson, sold the farm to the Hon. Simon Cameron in 1872, which Simon referred to as Donegal. 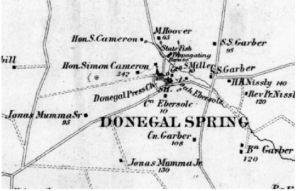 Simon Cameron’s father, Charles Cameron was a member of the Donegal Presbyterian church in 1790.

The Hon. Simon Cameron was appointed Adjutant General, was United States Senator from 1845 to 1851, and from 1857 to 1861, appointed Secretary of War by President Lincoln, and afterwards as Minister to Russia.

He was again chosen United States Senator from 1867 to 1877. Mr. Cameron was a self-made man in a true sense, as, without the advantages of early educational facilities, he rose to be a man of marked ability ; his long and patriotic services in the affairs of State is a conspicuous example of what may be attained by indefatigable perseverance and untiring zeal.

Though often thought of a scoundrel as exhibited by Thaddeus Steven’s remark to President Lincoln when asked about Simon’s character “I don’t think that he would steal a red hot stove.” and Mary Todd Lincoln’s letter to Simon Cameron stating “I understand that you forgive me, for all past offences, yet I am not Christian enough, to feel the same towards you….” (though more a reflection of Mary Todd Lincoln than Simon Cameron) and from his own quote which defined an honest politician as “one who when he is bought will stay bought.” Despite this, Simon was generous to his family and friends.

In Simon’s will in 1889 he bequeathed two thousand dollars to Donegal Church, the income of which should be expended for the care and planting of trees and for the care of the grounds around the Church. Subsequently Mary Cameron, the last private owner of the estate, established and endowment in 1959 to continue this legacy which is now managed by the Donegal Society. In a strange bit of foreshadowing, Simon Cameron Setup a trust for his imbecile son Simon (a word used in the late 1800’s to describe a special needs person) for his care on the estate; a move that would be echoed when Elizabethtown college used the Inn for a home for special needs children.

Simon Cameron’s son, the Hon. James Donald Cameron, served with distinction as United States Senator from 1877 to 1897, and as Secretary of War under President Grant. At the death of his distinguished father, he came into possession of the original Stevenson property contiguous to the Glebe land. James Cameron was responsible for the grand expansion of the house and farm and the colonial revival style of the old farmhouse.

Miss Mary Cameron, Simon Cameron’s granddaughter, lived at Donegal until her death in 1959. The large estate was divided into 6 Farms surrounding the inn with only 15.25 original acres remaining. Miss Mary Cameron’s estate sold the inn to Elizabethtown College in 1961 and it was used as a men’s dorm, then a school for special needs children. After a renovation funded by great granddaughter of Simon Cameron, Mrs. G. Howland Chase, Elizabethtown College used it as a conference center with lodging in the mansion.

In late October of 1981 the Estate was transformed into a country inn when Lancaster County culinary celebrity Betty Groff, who for decades was the face of Pennsylvania Dutch cooking, along with her husband Abe purchased the estate. Betty and Abe considered purchasing it from Mary Cameron’s estate in 1961 but instead focused on their Groff’s Farm Restaurant in Mount Joy. Betty Groff was made an over-night success when Craig Claiborne reviewed her Groff’s Farm Restaurant in the New York Times and James Beard remarked “I think of Groff’s Farm as a wonderful example of how great American cooking can be.”.

Today the estate continues as a country inn and restaurant where one can enjoy the hospitality of days long gone and where brides find a bucolic destination wedding.

For more history on the inn, visit Wikipedia page on the Cameron Estate.